Well Hello Internet!
Since tomorrow is thanksgiving, tonight i am making pecan pie!  A whole lot of pecan pies!
these ingredients are enough for 3 pies
9 eggs
2 1/4 cup of sugar
2 cups of agave nectar
3 teaspoons of vanilla
3 pinches of salt
4 cups of chopped pecans
1 cup of whole pecans
3 pie crusts (i used gluten free pie crusts)
ok so i mixed everything except the pecans together in a big bowl:

this is what it looked like when everything was mixed.  make sure all the sugar and eggs are mixed in!

then i added the chopped pecans, and really mixed those in too. 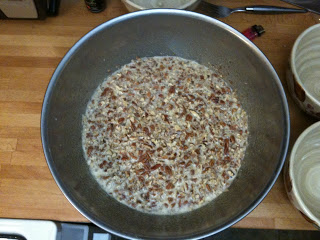 you gotta keep mixing!  it will separate!
anyways,
while i was mixing i put the pie crusts in the oven for 5 minutes to precook them.
when i took them out i poured the filling in and then made some patterns with the whole pecans:

i baked it for 45 minutes at 350°
it may take a little longer, or a little less based on your oven, but if you poke it with a fork, it should be pillowy, but firm.  imagine an omelette filled with sugar and pecans!  😀 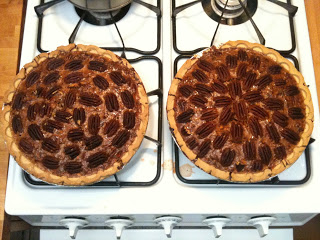 But wait!  Didn’t I say that I was making three pies?

I decided to get a little creative and I made two more pies with the remaining pie mixture, combining it with pumpkin pie!

I used just a canned pumpkin pie mix and folledthe directions on the can. Luckily both pies cook the same amount of time!

The first pie, I made a ying yang.  I used parchment paper to create the division while pouring. 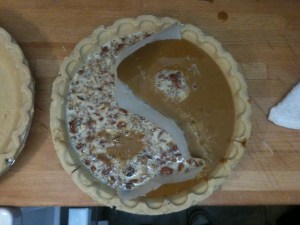 I baked this one first for 15 minutes at 425. Then I remove the parchment paper. The pie was now firm enough p remove it but not too firm:  then I turned the oven to 350 and baked for another 25 minutes

The second pie was kind of a swirl. I poured the pecan mixture into the pumpkin mixture, and then swirled!  here’s how it came out: 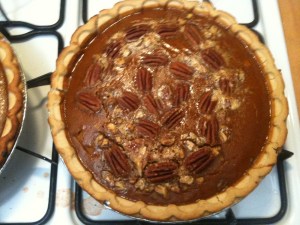 I call it the milky way pumpkin-pecan pie!

And here’s all the pies!!

Oh man 4 pies!  I think well have to eat one tonight… They are irresistable!