On this rainy sunday i decided to see if i could recreate some of the tartes we made in school at home.  except with a few of my own twists!

so i made a tarte in same style as a tarte bourdalou, except instead of pears i used peaches.

but i did everything the same, i poached the peaches and made an almond cream.  it was a little more difficult with peaches because they are a bit softer.  and unfortunately one of my peach halves got destroyed when i was trying to get it off of the stone, so i ended up with only 5 peach spokes instead of 6.  oh well, i bet its delicious still!

here it is before baking: 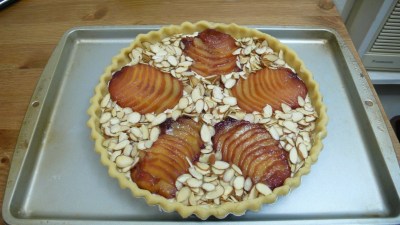 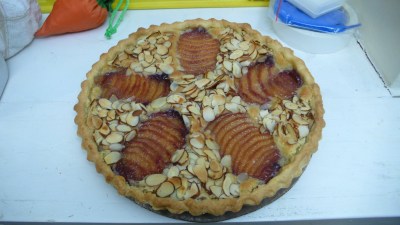 then i made a tarte aux pommes (apple tart).  for this tarte for the apple compote i used a sweeter apple so i wouldn’t have to use so much sugar.  i cooked it in goslings rum to give it some extra yummy flavor.  then since i had some almond cream left from the peach tarte, i put some of that on the bottom.

on top i used granny smith apples since they are nicely acidic.  i cut them up really thin, and arranged them in such a way that i was able to have three spinning layers instead of two.  it ended up looking pretty cool.

Here it is before baking: 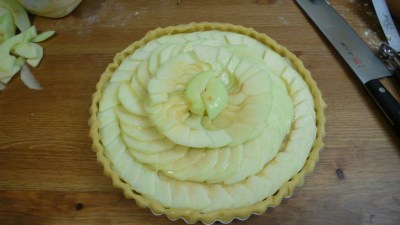 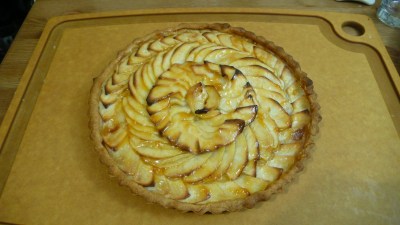 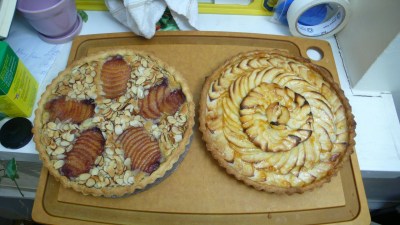