Well Hello Internet!
I recently discovered the deliciousness of persian cuisine.  One of the things i liked the best was the way this particular method of cooking rice creates a delicious crust of rice on the top.  Hidden inside can be all sports of delicious meats, fruits, and vegetables.  I investigated some recipes, and before long i had figured out my own delicious version of it.  There are quite a few steps to it, but each of the steps is relatively straight forward.  The rice is cooked very differently from my Perfect Rice recipe, which was an interesting thing to discover.  All together this takes about 3 hours.

For the Marinade/Crust
2 cups Yogurt (Especially good with Greek yogurt, but any yogurt will do fine.)
9 or 10 strands of saffron – soaked in 1/4 cup boiling water
zest of half an orange
salt and pepper
1/2 teaspoon cumin
1/2 teaspoon coriander
2-3 cardamom pods (cracked open and ground)
1 tablespoon honey

For the Rice
3 cups basmati rice (cleaned and rinsed until the water is clear)
2-3 tablespoons ghee
1/2 onion
3 egg yolks
salt and pepper.

To Prepare the Filling

1.  Mix all the ingredients from the marinade together

2.  Take the sausage and place in a pan with 1 onion, 2 cloves of garlic, saffron and turmeric,  cook over medium heat until the sausage is cooked, and the onions are tender.  Leaving the juice in the pan, mix the cooked sausage and onions into the marinade.

3. Heat back up the juice in the pan, and add the other half an onion plus 1 clove of garlic.  Cook until its starting to get soft, then add the kale.  Toss for a few seconds, then add the salt and pepper, plus the prunes.  cover and cook for about 5 minutes.   Set aside.

2.  Fill a large pot of water and bring to a boil.  Add 3 cups of rice stir making sure all the grains are separate from each other (kind of like cooking pasta).  Cook for maybe 4 minutes, then strain the rice out through a sieve.  You want the rice to be soft on the outside, but still crunchy on the inside.  Its going to be cooked some more in a little bit.  Run it under cold water to stop the rice from cooking.

3.  Remove the meat from the marinade, and set aside.  Add 3 egg yolks into the marinade and whisk together.  Mix in about 1/3 of the rice.

4.  Take a Pyrex dish (it could be round or square), and add 2 tablespoons of ghee.  place in the oven for to heat up the pan and melt the ghee.   ( about 5 minutes)  Remove from the oven

5.  Spread the rice mixture into the bottom of the hot pan.  Try to make a nice even layer that goes a little up the sides.  Keeping mostly to the middle of the pan, spread out a layer of about half of the spinach and prune mixture.  Then a layer of all the meat followed by another layer of spinach.  Finally cover everything with the rest of the rice, fully encasing all the meat and spinach.  sprinkle with any leftover marinade and juice, salt and pepper.

6. Cover with a layer of greased wax paper, followed by 2 or 3 tight layers of tinfoil.  Press down on the rice mixture to make sure everything is good and compacted.  Place in the oven for about 1.5 hours.

7. After about an hour and a half, take a look at the underside of the rice, through the pyrex.  it should be turning a nice brown color.  At this point i like to turn the oven up to about 450° for the last 20 minutes or so.  This will make the crust nice and dark golden brown – and nice and crispy..

8. Remove from the oven and let it sit for 15-20 minutes still covered.  Remove the wax paper, and tinfoil.  carefully run a knife around the edges to separate the rice on the sides.  Place a serving plate over it, and flip the rice out onto the plate so the brown side is up.  Garnish with some fresh parsley, and serve. 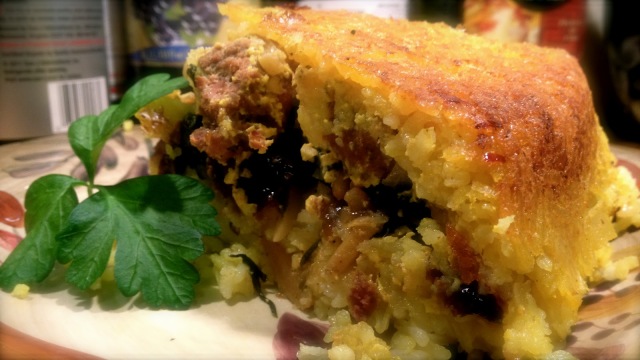 Like Loading...
Well Hello Internet!
Another dish i have been making quite a bit recently is Saag Paneer.  This is an Indian dish most commonly made with spinach, but can also be made with a variety of other Greens.   I have experimented with many of these greens, but have to say that my favorite is to make it with a mixture of Kale, and Spinach.
Here is what you will need:
1 Bunch of spinach – (at least 250-300 grams)  cut up into large pieces
1 bunch of Kale – (250-300 grams)  – cut up into medium sized pieces
150 Grams Paneer (Indian Cheese) cut into 1 inch cubes –  This will not really work with any other type of cheese, except maybe fresh Queso Blanco
2 tbspns Oil
1 tbspn Ghee
1/4 tspn cumin seeds
1/2 tspn mustard seeds
2 cloves garlic (grated)
1 tsp coriander
1/2 tsp ground ginger
1/4 tsp nutmeg
1 inch Fresh Ginger – Grated
1/2 tsp salt
1/4 tsp sugar
1 tsp Garam Masala
100 ml milk (OPTION:  when i first started making this i used Heavy Cream.  but i don’t always have it (and its very rich), so sometimes i will use milk, or Almond Milk)
So this dish is very easy once you get the hang of it, but it requires very good Mis-en-Place.  which means have everything ready and organized before you start cooking as it all happens very fast, and there are lots of spices!  it helps if you use some ramekins, or some other little bowls.
Here is how to best organize yourself:
1. In one bowl, put the cumin and mustard seeds, along with the grated garlic.
2.  In a second bowl, put the coriander powder, the ground ginger, and the nutmeg.
3.  In a third bowl, put the sugar, the salt, and the grated FRESH ginger.
ok so that’s enough organizing.
now for the cooking.  First! heat up the ghee in a pan, and add the paneer to it.  fry the paneer until it is nicely browned on all sides.  it can burn quickly so don’t let that happen.  once its finished cooking, strain it and put it aside in a bowl.  sprinkle the Garam Masala over the paneer while it is nice and hot.

Second!  with the leftover ghee that should still be in the pan from the paneer, cook the spinach and the kale, until it is just wilted.  this will not take very long.  put all of this into a colander and let it sit.

Now is time to cook the spices.  and where all our organizing comes into play.

put the 2 tbspns of oil into the pan and heat it up.  throw the first bowl in (the cumin and mustard seeds, with the garlic)  cook it for about 10 seconds, or until the seeds start sputtering.  Then!  throw the Second bowl in – the ground coriander, ginger and nutmeg.  and cook that for about 10 seconds also.  you will have a spice goop that is very hot now.

quickly throw the cooked greens back into the spices, and toss around until the spices are even spread around.  cook this for about 2 or 3 minutes.   Then add the cooked Paneer, along with the Third bowl – with the sugar, the salt, and the FRESH ginger.  cook all this for about 2 or 3 minutes, and Finally add in the milk (or Cream, or Almond milk, whichever route you choose to go)  cook for a further 2 minutes, and then its done!

Serve it with some rice, and if you want you can serve it with some other curry!  (soon i will put up more curries, as i’ve been on a bit of a Currinary adventure recently…..  (get it curry + culinary)  😉