Last night for dinner i went all out and made ravioli.  From scratch!  That’s right i made the pasta dough, and the filling, and the sauce.
But i can’t say that I did it all alone, i had help from my good friend Julie – who also took most of these pictures!
Not only was this extremely delicious, it was easy to make and also lots of fun!

one butternut squash.
one leak (or an onion)
a couple of cloves of garlic
salt and pepper

For the Pasta Dough:
2 cups of flour
3 egg yolks
4 tablespoons of water + some extra

One egg for the making of the Raviolis

For the Alfredo Sauce
half a cup of butter
1 1/2 cup of parmesan cheese
1 cup of cream
Garlic
Parsley
Pepper.

First, we cut the squash in half and took out the seeds.  Then we roasted it with the flesh side down for 30 minutes at 375° with a little olive oil.

While this was cooking I made the pasta dough.
I put 2 cups of white flour in a bowl, and made a well in the center.  In this well i put the 3 egg yolks, and the 4-5 tablespoons of water.  i slowly worked flour in from the sides until i had a dough.  (if necessary, you can add more water)
Knead this ball of dough for 10 minutes, and then coat it in oil and let it sit for another 10 minutes.  This will allow gluten to develop.
Heres my ball of dough:

While the dough is sitting, and the squash continues to roast, it is time to saute the leek and garlic.  so take your leek (that has been cleaned thoroughly and diced) and add it to some melted butter in a pan.  cook this for about 5 minutes and then add in the garlic (also diced).

If you’ve been counting my minutes, you will have figured out that about 30 minutes has elapsed now, and so the squash should be ready to come out of the oven.  Remove it from the oven and let it cool.

The Leeks should also be done at this point so those can be taken off the heat, and also allowed to cool.
Next up comes the mixing of the filling.  Scoop out the squash into a bowl and get rid of the skins.

Mush it up real nice with a fork, and then add in the leeks.  Mix these together until they are well incorporated. 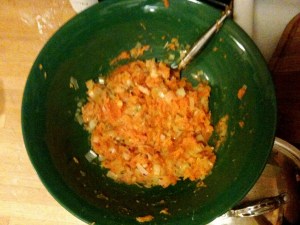 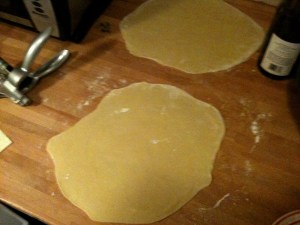 Now comes the time to make the raviolis!  Take maybe 1 or 2 tablespoons (depending how big you want the raviolis) of the squash mixture and put them in little balls over one layer of the dough.  (remember!  you want to get as mush use out of this dough as you can, so place the balls well.

Take the egg for the ravioli and mix that up.   brush it everywhere on the dough where there is not squash.  next take the other sheet of dough and place it on top.  press down in between all the balls.  now its starting to look a little like ravioli!

Cut between all the ravioli, and press down all the edges – sealing inside all that squashy goodness!

Next bring a pot of water to boil.
While the water is boiling, it is a good time to start making the Alfredo sauce.
Take the butter and melt it in a pan.  Add in the cream.  Stir and simmer.  Add in the cheese, and let it melt.  add in the garlic, salt and pepper.  if you have any parsley that is nice too.
ok put that to the side.
The water has now boiled!  so its time to cook our ravioli.  just a few at a time.  i made 10 ravioli, so 5 at a time, which is essentially a serving.  or a little more, these are pretty filling!

Fresh pasta, takes no time at all to cook.  maybe 2 or 3 minutes. Ravioli conveniently will let you know when they are done, because they float!  so when they float you can scoop them out and serve.  Put some of the delicious Alfredo sauce over it, and thats it! 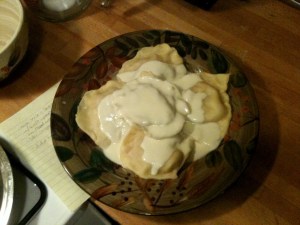 So that’s it!  and as always, (well normally always in my video blogs) the first bite on camera! 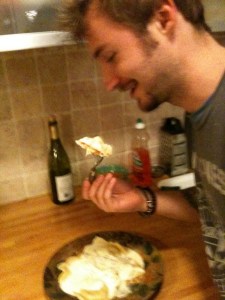 Special Thanks to Julie – who provided much help in the preparation, and also most of the photos!